JFM and Jon Stanbrough at Canyon for the Nationals this weekend! 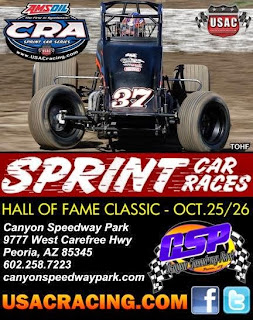 USAC National Sprints and USAC/CRA at Canyon this Friday and Saturday!! JFM is teaming up with Jim Stanbrough this weekend at Canyon Speedway Park in Peoria, AZ for the 13th Annual Hose Advantage Hall of Fame Classic.

Josh Ford Motorsports will have the nationally renowned, 2 time National Sprint Car Driver of The Year, 5 time Kiss champion, 2006 Sprint week Champion and HARF Hall of Famer Jon Stanbrough in the driver’s seat of the JFM Berry Pack / King Racing Products / A&A Precision CNC Machine #73 for both nights.
Jon Stanbrough, out of Avon Indiana, has had another great year and is coming off a 3rd place finish in Kokomo on Friday the 18th. Stanbrough took 3rd at Tri-State Speedway in Haubstadt, IN on September 28th and 2nd at Brownstown Speedway in Brownstown, IN on October 11th. Jon is incredibly consistent, winning over 180 feature races in his career!

Stanbrough will be going up against the nation’s best with the likes of Darland, Gardner and Bryan Clauson… all of have driven for JFM or will in upcoming races.

All the excitement begins Friday with the gates opening at 4PM and the racing starting at 7PM.

Josh Ford Motorsports has decided not to participate in the winged portion of the Trophy Cup in Tulare.

Evaluating the #73 car after Mitchell flipped leading the 40 lap Main 2, there is too much damage to repair in time for tonight’s and tomorrow night’s race at the Thunderbowl.

We apologize for any inconvenience this may cause with plans you may have made. 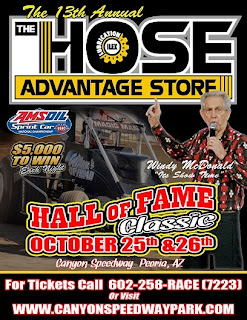 Next Friday and Saturday we will have Jon Stanbrough at Canyon Speedway Park in Peoria, AZ. Jon is one of the most talented and awarded Sprint Car drivers in the nation!

Next 2 races for JFM

@JFM_Racing
Posted by Josh Ford Motorsports at 3:23 PM No comments:

It’s hard to win upside down. 17 Flips tonight including Mitchell as he was leading the Feature.

Matt was one of the lucky ones not taken to the hospital. First it was Araki getting tagged by Nikko, flipping in hot laps, then Bernal flipping in time trials and then Niemela involved in a crash with Foresburg. JFM sincerely wishes all the best and a quick recovery for everyone involved in an incident tonight.

After killing it with Fast Time of the evening, Mitchell started 6th and went on to take 2nd in his heat race. The format of the race events changed mid-stride, changing the dynamics. In the 20 lap red flag littered Main 1; Matt started 11th and spun out on lap 2. This put him starting in the back where he gained some ground and again spinning out, again starting in the back. Mitchell pushed his way back up to finish 9th.

Now in the Feature race, Mitchell driving the A&A Precision CNC Machine / King Racing Products / Berry Pack / CAM2 Blue Blood Racing Oils / JFM #73 started 14th. Mitchell came charging in immediately in the 40 Lap finale, positioning himself in 5th by lap 6 where yet another of the seemingly continuous waving red flags stopped the non-winged sprints cold. On green, he powered his way to 3rd by lap 8, another flag. Matt took control in the 10th lap, out in front leading… when fate took him and the JFM #73 where literally half the field had departed, wheels up.

Full and official results of this treacherous race will be posted tomorrow here and on Josh Ford Motorsports and the JFM Blog.

Tomorrow night we will be right here again at the Thunderbowl for the Southwest Contractors ‘20th Annual Trophy Cup – Winged Sprints’. This will be a first for JFM and we are excited to get out there and not flip so much!!

JFM and Matt Mitchell come in 5th at the “Cotton Bowl” in Hanford Saturday. 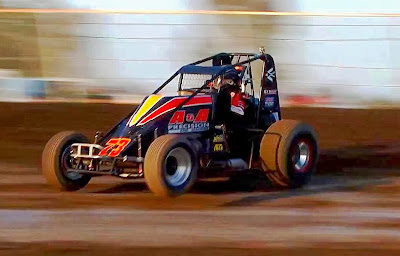 We are headed to the Thunder Bowl this Thursday!! Follow us @JFM_Racing

Posted by Josh Ford Motorsports at 9:16 PM No comments:

Josh Ford Motorsports and Matt Mitchell will be at Kings this Saturday for the 28th Annual Cotton Classic!

The USAC West Coast Sprint Cars will crown their Champion at the Cotton Classic for the second year in a row at Kings Speedway! The finale for the 360 series will have all the top contenders vying for the championship… although Danny Faria Jr. has widened his lead considerably in recent races, taking him down would be nearly impossible at this point.

The top four points leaders for the West Coast Sprints 2013:

JFM will have Matt Mitchell, Yorba Linda, CA, wheeling the Josh Ford Motorsports A&A Precision CNC Machine / King Racing Products / Berry Pack #73. Mitchell has been solid all year and is ready to represent for this final race of the year for the West Coast Sprint Series!

Gates open at 5PM Saturday, with racing scheduled for 6:30 PM.

We will see you there!

Be sure to follow the race on our Twitter feed @JFM_Racing!
Posted by Josh Ford Motorsports at 1:56 PM No comments:

JFM racing with and without WINGS in the ‘2013 Trophy Cup’ at the Thunderbowl in Tulare, CA

For the first time ever, JFM will strap a wing to the #73 car for the Friday and Saturday ‘Winged’ portion of the weekend’s ‘Trophy Cup’ at the Thunderbowl.

Last year, Josh Ford Motorsports came into the Thunderbowl for the first ever ‘Non Winged Trophy Cup’ riding high on a cloud of success through the 2012 racing season. We were running some incredible talent and Jimmy May, winner of the ‘2012 Mechanic of the Year’, Mikey Evans and the JFM team consistently put solid and lightning fast cars on the track to compete with the best the west has to offer!

This year our winning aspirations have not waned in the slightest. JFM will run with the accomplished and skilled Matt Mitchell for the ‘Non-Winged’ October 17th and ‘Winged’ October 18th and 19th running of the ‘Trophy Cup’!

As of 9-30-13 there are 39 ‘Non-Winged’ and over 90 ‘Winged’ cars registered for the 2013 Trophy Cup. This is a very talented field, some of the most prolific drivers and race teams in the nation. This is an incredibly lucrative event with over $150,000 in Total Payout. Who wouldn't want to be a part of this fantastic and exciting 3 day extravaganza?

Follow everything on JoshFordMotorsports.com !
Posted by Josh Ford Motorsports at 4:28 PM No comments:

This Saturday, October 5th, the USAC CRA Sprint Car race in Perris has been cancelled by the track, citing conflicting schedules and other reasons.

Next up for Josh Ford Motorsports is a West Coast Sprint Car race on October 12th, the ‘28th Annual Cotton Classic’ at Kings Speedway in Hanford, CA. We will again have veteran Matt Mitchell wheeling our Jimmy May and the JFM Team tuned King Racing Products / A&A Precision CNC Machine / Berry Pack #73 for the Saturday event.

We love racing Kings and can't
wait to get back and put it all out on the track. Hope to see everyone there!

Be sure to follow the race on our Twitter feed @JFM_Racing #JFMKINGS
Posted by Josh Ford Motorsports at 12:12 PM No comments: